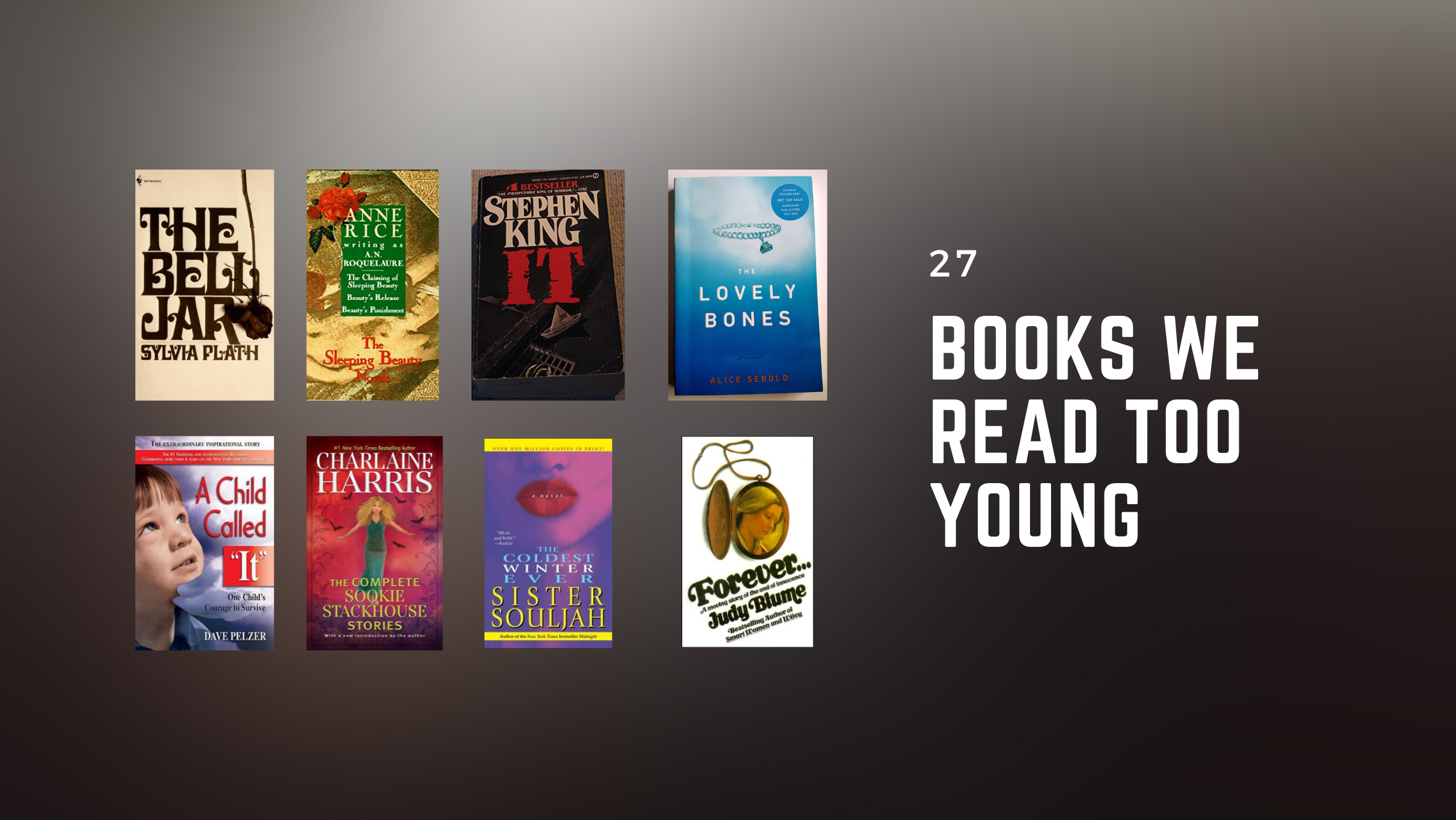 Which of these books did you sneak from the library or your parents' bookshelf when you were way too young for it? If you were an avid and early reader like me, you powered through the kids and young adult book sections at the library fast and wandered over to the adult fiction and non-fiction shelves to avoid reading cereal boxes and instruction manuals.

Along with copies of my sister's Cosmopolitan magazine, many of these books gave me a sense I was more grown-up than I really was. Check out the list and see which ones you have read, and add your own in the comments!

This list was compiled from more than 3,000 comments received on my TikTok video from August 8, 2021, talking about books I read when I was way too young.

No more wire hangers, the bloody steak, the love scene in the horse stable. A sad, torrid Hollywood childhood we had no business reading about when we were under age 10.

Beautifully written, but the romance with Mr. Chairman is not one for the kiddos.

This best-selling series about a mother coping with her daughter's meth addiction is serious adult content.

The quintessential dystopian novel is violent, disturbing and vividly sadistic.

Aimed at young adults when it came out in 1971, this novel would have a trigger warning today longer than your grocery list. Profanity, sexual assault, drug use.

The tragedy of mentally disabled patient Charley who receives treatment that temporarily increases his intelligence only so he can realize what he's losing. "This book had me a wreck in middle school," one commented.

The amazingly successful and smutty story of a young woman and the man who introduces her to a whole new world.

One of Oprah's early book club picks, this is the story of one woman raised by a mentally ill mother as she copes with friends dying from AIDS, health issues, and adultery.

Esther Greenwood copes with depression, anxiety, mental asylum, attempted sexual assault and more in this book which is seen as a roman a clef of poet Sylvia Plath's own struggles in the mid-20th century.

While most fan fiction and Wattpad stories are tame, it wasn't hard in the mid-2010s to find the explicit and "spicy" stories if you were looking for them. And some people were.

The book centers on teenage Katherine's decision to lose her virginity to her boyfriend Michael and made his member "Ralph" quite infamous.

This series starts out tame but gets raunchy later.

4. The Claiming of Sleeping Beauty by Anne Rice writing as A.N. Roquelaure (1983)

1. Flowers in the Attic by V.C. Andrews 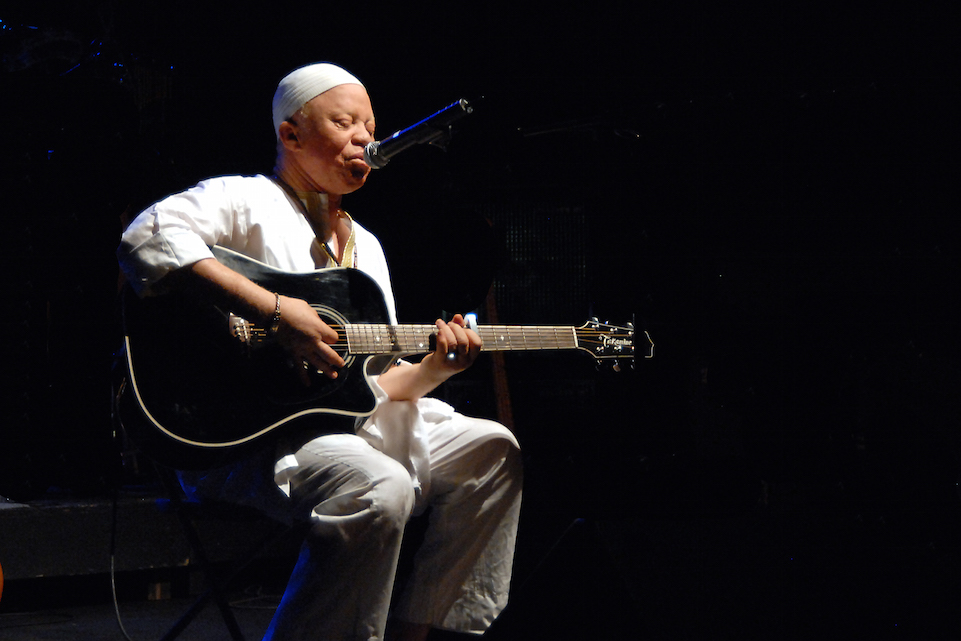 From outcast to Africa’s “golden voice”

People said he was cursed. Schoolchildren avoided him. His father sent him to live on the streets when he was a teenager.

Mali musician Salif Keita could be a bitter, angry man, but instead, he writes beautiful songs about life, love and fighting prejudice. His most recent is the plaintive “Folon.” The word folon means the past in Keita’s native tongue, Bambara.

“In the past/ no one wanted to know/ In the past, whatever happened, you could not speak about it/”.

Keita has lived through political turmoil, spending 15 years in exile during Mali’s military dictatorship. “Folon” is about his homeland’s return to democracy, but it could just as easily be about Keita’s own life. Born albino, he was ostracized by his village and his family, and left to live on the streets as a teenager. He found his voice and his salvation in music. Today, he has earned a place among the best and brightest on the world music scene and is frequently called the golden voice of Africa.

“Music is my life, my freedom. It gives me the opportunity to talk to people. To tell them what I want and what I feel,” he said in an interview with PBS Newshour in 2015.

Cast away by his family, Keita made his own living in Mali’s capital, Bamako, by drawing on his heritage, peppered with his own experiences as a pariah. Music and storytelling came naturally to Keita, who came from a family of griots, or storytellers, who have kept West African history alive for thousands of years through words and music. His big break came in the eighties as leader of West African supergroup Les Ambassadeurs who rode the global music wave with their fresh take on afro-pop.

Keita’s albinism, a genetic condition that causes the skin, hair or eyes to have little or no color, also caused his blindness. But looking back on his life and his success, he demonstrates nearly boundless resiliency and optimism. “If I were black,” he told Newshour. “Then I wouldn’t have had this opportunity to be popular in the world.”

When he was young, Keita wanted to be a teacher. Today, as the father of several albino children, he splits his time between family, music and his eponymous global foundation for the fair treatment and social integration of people with albinism.

“Albinism is not a curse, but a disease which, like any other, needs to be treated with care and love,” he told South Africa’s City Press in 2014.

He sent a powerful message from his life in the song “La Difference”:

Some of us are beautiful

All that difference was on purpose

He found lightness and humor in his journey from outcast to one of the continent’s most well known musicians. “If I were black, I would have had good eyesight, and I could be a teacher for 40 people,” he said. “But now, I’m a teacher for a million people. That’s funny.”

As he sang in “Folon,” “In the past, people did not want to know/ today, people want to know.”

Note: this text originally appeared in Give YourSelf Permission Magazine 2015.

Published by Lynn in Stories We Love
Tags: give yourself permission, overcoming adversity, salif keita