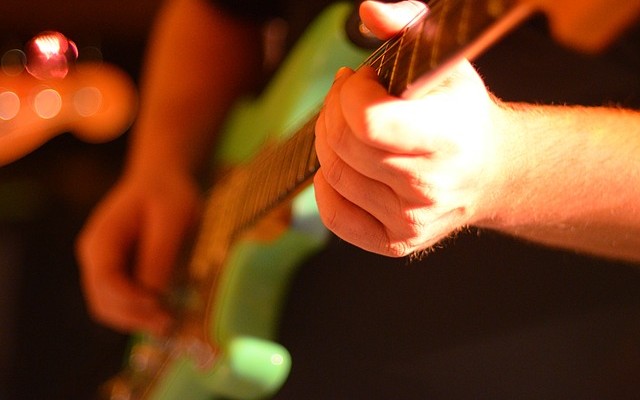 Neil crunched through the chords of AC/DC’s “Thunderstruck” on the corner of Hill Street and Main in Santa Monica, the mini-amplifier stealing power from the corporate coffee seller without gaining the attention of its many baristas. If the caffeine junkies sitting outside noticed the theft of electricity, they didn’t care. Nor did they care about Neil’s guitar playing. Two pairs of women talked non-stop, while the singles at the other tables stared into the abyss of whatever electronic device they brought with them.

“All right, du-u-ude!” The man clapped his hands and whistled a long shrill note. A few coffee drinkers glanced up to see what the fuss was about, but no one else clapped.

Neil noticed the man had a way of drawing the word dude out as though it had three syllables, like a caricature of a laid-back beach bum in the eighties. He squinted into the sun and craned his neck to get a good luck at Dude’s face.

He was older than Neil expected, though maybe the old school “du-u-ude” should have been a clue. Deeply tanned skin hung in creases from his bony face, and a hot pink circle on his nose suggested a recent skin cancer intervention.

He extended his hand then curved long fingers around Neil’s outstretched palm in a loose, but not limp, shake.

“Linus,” he said, his left fist banging on his chest.

Neil introduced himself and thanked him for the applause in a low voice. The attention, though welcome, was a little embarrassing.

“Du-u-ude, you are awesome. You should be playing the Civic Center, not the street corner.”

“You got any of your own songs?”

“Sure, but no one wants to hear those.”

“I do.” And with that, Linus folded like a penknife onto the low brick wall surrounding the coffee shop patio, drawing his knees up to his chin and bringing his worn flip-flops encasing surprisingly well-manicured toenails into view.

Why not? Neil thought. He pulled the amplifier cord out of the guitar and strummed a little.

“I’ve got this song I’ve been working on lately,” he said. “I don’t have a name for it yet, and only an idea for the chorus lyrics.”

Neil played the song, humming where he didn’t have the lyrics worked out. Linus was an attentive audience of one, his eyes trained on Neil’s fingers pressing and flicking over the guitar strings, a smile playing on his face throughout.

“That was epic, du-u-ude,” he said, rising from the brick wall to give his standing ovation. Neil couldn’t stop smiling.

“Come with me,” Linus said. “I want you to meet some people over at this pub. They’ll let you play there. Maybe even pay you.”

Neil glanced at the guitar case with its few crumpled dollar bills and loose change. He’d put half of the money in there himself, just to make it look like people were donating. The corner wasn’t working out so well, he thought. What did he have to lose?

One thought on “Fiction in a minute: Dude, Part 1”