Steve’s mother, Margaret Arakawa, died on December 26, 2016 of natural causes at home and surrounded by family in Arleta, Calif. She was 92.

Feisty and faithful, Margaret worked hard to gain her mobility and voice back after a serious stroke in January 2015. We watched her recover slowly over many months, her determination in physical therapy astounding caregivers and medical pros who assumed a 91-year-old wouldn’t have much fight in her. She would prove them all wrong. I have many memories of her perseverance during those PT sessions and on her own: endless arm and leg lifts in bed, those first steps with a walker, learning how to write with her left hand. She took a fierce pride in surprising people with her abilities in recovery, and she taught me that age is only a number. Steve, who saw her nearly every day, did everything possible to keep her in her home until her last breaths.

I met her for the first time in 2004. She was 80 but you might have guessed late 60s. She had an exercise bike in the living room in front of the television that she rode every day, and the healthiest diet of anyone I knew, despite her skill at cooking big, rich Italian dinners for us. Family and dog photos, art projects by her grandchildren, clown figurines and even a statue of Pope John Paul II covered the walls and nearly every surface of her tidy home. She wore hearing aids in both ears, and to this day, we’re not sure how much she could hear. Sometimes she seemed profoundly hard of hearing, and other times, we were surprised that she understood our sotto voce comments.

She loved dogs and had one or two as companions for most of her adult life. She had a soft spot for male dogs. About ten years ago, she adopted her last dog, a young female German shepherd whose previous owners called her Ginger. Margaret promptly renamed the dog Champ and from that point on referred to her as “him.” We always laughed and shook our heads at Champ’s forced gender confusion, but the dog didn’t seem to mind what you called her as long as she got treats and belly rubs.

Born and raised in Washington D.C., Margaret was the youngest of four children and possibly the most mischievous. She told my mother a wonderful story about her days at the all-girls St. Patrick’s Academy. I may not remember all the details correctly, but it went something like this: She was hosing down a patio at the school as part of a punishment after class. I wish I could remember what the punishment was for — talking in class, maybe? Talking back? The nun who had reported her transgression walked by to check on her work. Margaret saw her, pointed the hose nozzle right at her and drenched the nun. Margaret smiled as she told the story, giving us the impression she had absolutely no regrets. 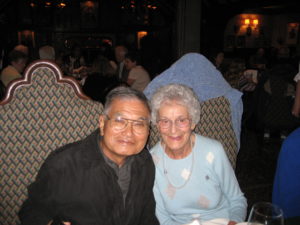 Ray and Margaret Arakawa at their 50th wedding anniversary party at the Tam O’Shanter Inn, where they met.

A Mass in her honor will be held Sat. Jan. 7 at 10 a.m. at St. Genevieve’s Catholic Church, located at 14061 Roscoe Blvd. in Panorama City. Following the burial, the family invites attendees to join them for lunch at the 94th Aero Squadron restaurant at 16320 Raymer Street in Van Nuys. In lieu of flowers, the family asks that donations be made in her honor to Notre Dame High School of Sherman Oaks, St. Genevieve’s Catholic Church, and the Franciscan Monastery of the Holy Land in America.

One thought on “In Memoriam: Margaret Arakawa”