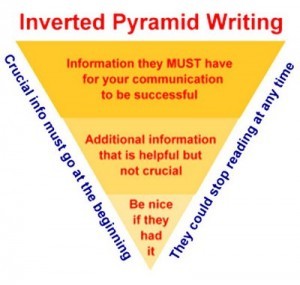 Writing a news release that works

Despite widespread reports of its demise at the hands of social media, the news release is not just alive, but relevant. Its basic format continues to be an important way to distribute content to both online and traditional media.

The same principles that scored publicity for “Mad Men” still work today -- a good news hook, attention-getting headline and well-written copy. What has changed are the distribution channels. Ten years ago, PR people aimed for a front-page story in the print media, which would have then fed the next day’s local television and radio news. Today, a good PR person may still target traditional media but would be foolish not to include online media, bloggers, Twitterers with Klout, and curators of interesting content.

The good news is that traditional and new media want the same thing -- content that is tightly written, timely and topical. Below are some tips for writing a professional news release with universal appeal.

Create an eye-grabbing, descriptive headline. “Vehicle Thieves Rarely Take a Holiday” is a clear and concise headline from a release issued on December 28 by the National Insurance Crime Bureau. What is it about? A report that found the highest number of vehicle thefts on New Year’s Eve and Halloween.

Write using the inverted pyramid format. Fill your first paragraph -- also called the lead -- with the story basics. You want to spark the reader's curiosity with either the conclusion or the “who-what-where-when-why” up front, and work in the supporting information and background in subsequent paragraphs.

Back in the days when newspaper layouts were pasted together by hand instead of laid out on a computer, an editor looking to shorten an article would just cut from the column end, where the least important information was placed. The inverted pyramid format is still valuable in online media, because if someone only reads the first paragraph and doesn’t either scroll down or click through, they still get the gist of the story. Notice how this release about healthy holiday tips summarizes its main point in the first sentence, and then works in all the relevant details in the second.

Enjoy the season's meals without the guilt this year. The National Foundation for Cancer Research (NFCR) is continuing to help you make healthy choices this holiday season with 15 easy-to-follow tips, crafted by NFCR spokesperson Chef Charles Phillips of Nashville's 1808 Grille.

Include a quote from your organization’s spokesperson. Quotes often appear in the second or third paragraph of a news release, and are a great way to insert points-of-view, claims or opinions.

"Electronic waste is a very serious environmental issue, both because of toxic materials it contains and because of the lack of options for safe disposal of this equipment," said Lower East Side Ecology Center executive director Christine Datz-Romero. "That's why we make sure that the recyclers we work with guarantee that all of the material we collect is safely recycled in the United States, instead of being exported to the developing world or incinerated stateside."

Include your organization’s background at the end. In PR, we call this the boilerplate, or a sentence or paragraph that describes an organization and is included at the end of all news releases. Include a link to your website for more information.

Include contact information. In case the reporter or writer has questions, news releases usually include in the header the name, office phone number, cell phone number and email of the organization’s PR person or most appropriate subject matter expert.