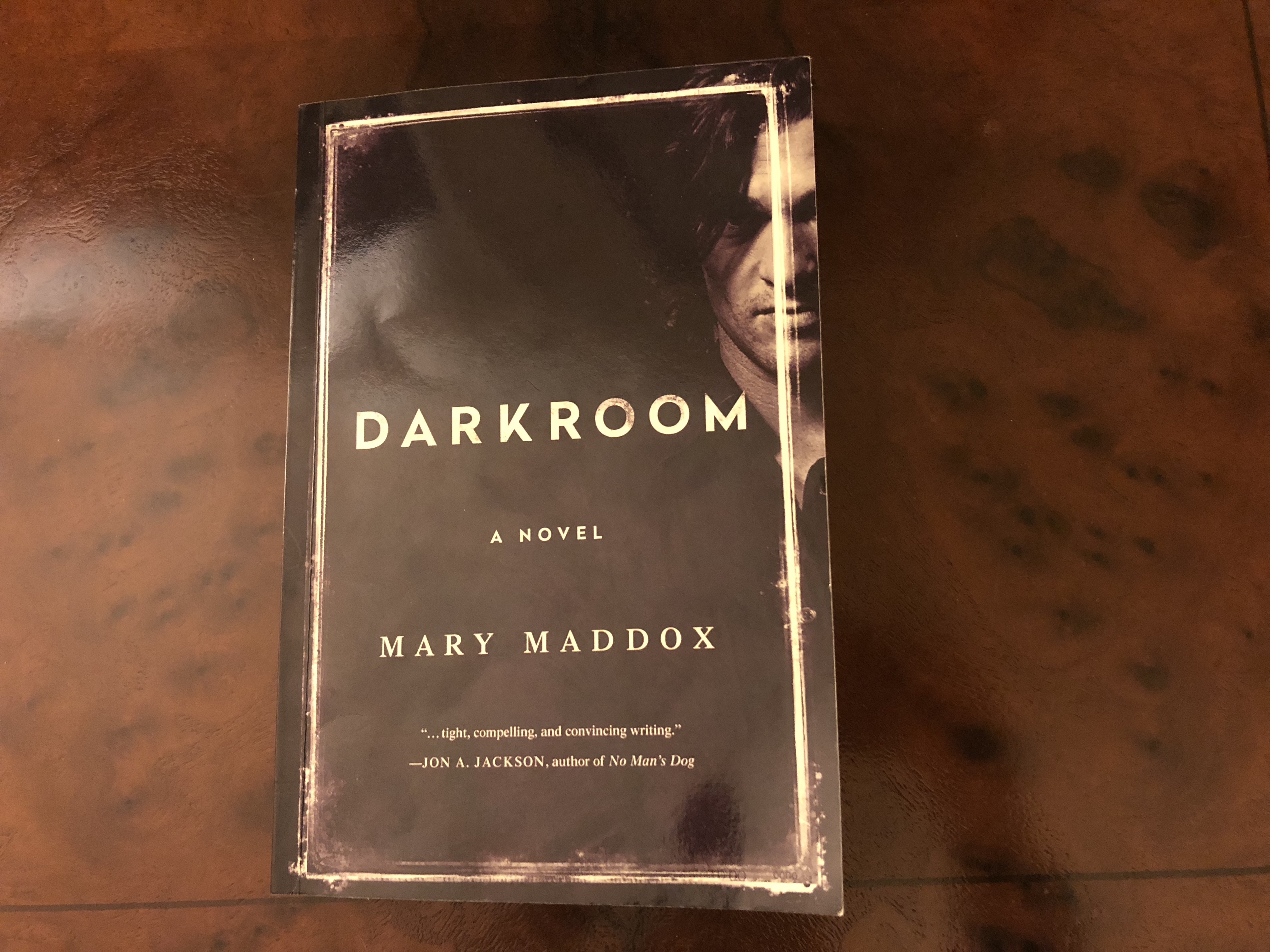 Characters in Mary Maddox’s 2016 thriller, Darkroom, don’t crack many smiles. They live in a bleak world as full of shadows as the old-school darkroom where photographer Day Randall had developed her artistic images. When Day goes missing at the start of the novel, her absence sets her roommate Kelly Durrell on a dangerous journey into the violent sphere of drug dealing and distribution controlled by the very rich and very secretive Stuart Helm.

Kelly and Day are an unlikely pair and Darkroom asks readers to accept their friendship as deep enough to inspire extraordinary acts on Kelly’s part. Kelly, an assistant curator at the Museum of the Rockies, is attracted to Day’s photographic talent and sympathetic to her struggles with mental illness and drug use. Kelly invites the woman to share her townhome and her life. Kelly, despite her professional success, lives in an isolation of her own making, far from her estranged parents and the memory of her dead sister in the Midwest. She has no particular love for her adopted home of Boulder, Colorado, and Day is her only friend. The only real commitment keeping her in Boulder is her demanding job at the museum. She works for a micro-managing, credit-stealing boss named Joyce who makes workdays nearly intolerable. In the first chapter, Kelly describes herself as a “woman who dabbed her smudged mascara with a tissue and dreaded going to work.” Kelly seems bogged down by inertia, not particularly interested in anyone sexually, intimate with no one, working for a boss she dislikes. She’s in a sort of stasis. If she first befriended Day in order to shake up her own life, she later finds out that the price will be much higher than she considered.

Readers looking for wise-cracking, articulate cool dude bad guys in the style of Elmore Leonard won’t find them here. The novel’s other characters are as grim and humorless as the world Kelly has created for herself in Boulder. We meet the reclusive Stuart Helm, living in a high-tech compound with his child bride Odette who sneaks out at every occasion to do drugs and find lovers. His head of security, Yount, is a stone-hearted thug willing to do anything for a buck. Others include Greg, a cocaine-addicted former artist and bar owner who was Day’s most recent lover and a bar manager named Welch who rapes unconscious women. None inspire sympathy or admiration. Even the bouncer with the silly name of Animal is a serious dude, trying to help Kelly find Day without destroying his own chances at a private security gig working for Yount that he desperately wants. Readers seeking relief from the frosty and sinister world Maddox has created find some in the blossoming romance between Animal and Nina, a bartender at the club where he works.

Maddox’s writing thrums with tension and some lovely turns of phrase from the first line: “Some photographs speak for the dead, but their meanings may be elusive.” By chapter six, readers are well into the swing of the mystery. Maddox builds suspense well through a series of not-too-surprising plot twists that kept me turning pages to find out what happened to Day and what price Kelly would pay to learn the secrets of her disappearance.

Readers looking for a taut thriller populated by unpredictable characters will find Darkroom compelling and worthwhile. Maddox’s crisp writing is a pleasure to read and the smart, resilient protagonist she created in Kelly Durrell is an example of the strong female characters I love to see in fiction. Those looking for something more light-hearted should keep on moving.