I spent the two last years of my dad’s life traveling the globe for a job, a lucky perk with terrible timing. My world expanded as Parkinson’s disease shrunk Dad’s world to a hospital bed and the cracks in the ceiling. I’ve learned this lesson again and again: Life’s good sometimes comes mixed with the unspeakably awful. My father, a blur in motion as I grew up, who had earned the nickname “waterbug” at work because he couldn’t sit still, who took me as a teenager to Los Angeles from our home in Tulsa for a weekend just because, lived his last years trapped in a shaking body, his jaw slack, eyes glazed.

His interest made me think of his old photo albums, stacked in a cabinet with their wedding photos and other memorabilia of my parents’ lives before marriage. Before anyone called him Dad, my father had joined the Air Force in 1954, working as a mechanic stationed at Sculthorpe Royal Air Force base in England. Whenever he had personal leave time, he went to see another country, and the photo albums gave us glimpses of what he saw. I remember square black-and-white photos of Dad skiing in the Alps, and him squinting at the camera on a gondola in Venice, Italy, shirts and pants dangling from a clothesline above his head.

“I’ve never been to Africa,” Dad said when I had told him Senegal on the west coast was my next stop. I heard yearning behind his words, as if he wished he were beside me, and I felt deeply sad that his health had shut that door. Even though I spent most of my time in a Dakar hotel conference room, but my dad thrilled as if I’ve been going on safari. I collected impressions of that sunbaked seaside city to share with him and Mom: the tall slender woman in colorful dresses and head cloths, men talking on cell phones and leading goats on leashes through the city streets. How the hotel’s plumbing only provided cold showers. How the sky turned red at dawn. It was September, and tents full of sheep and rams with curled horns dotted the main roads in advance of the Muslim holiday called Tabaski. 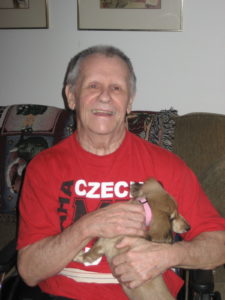