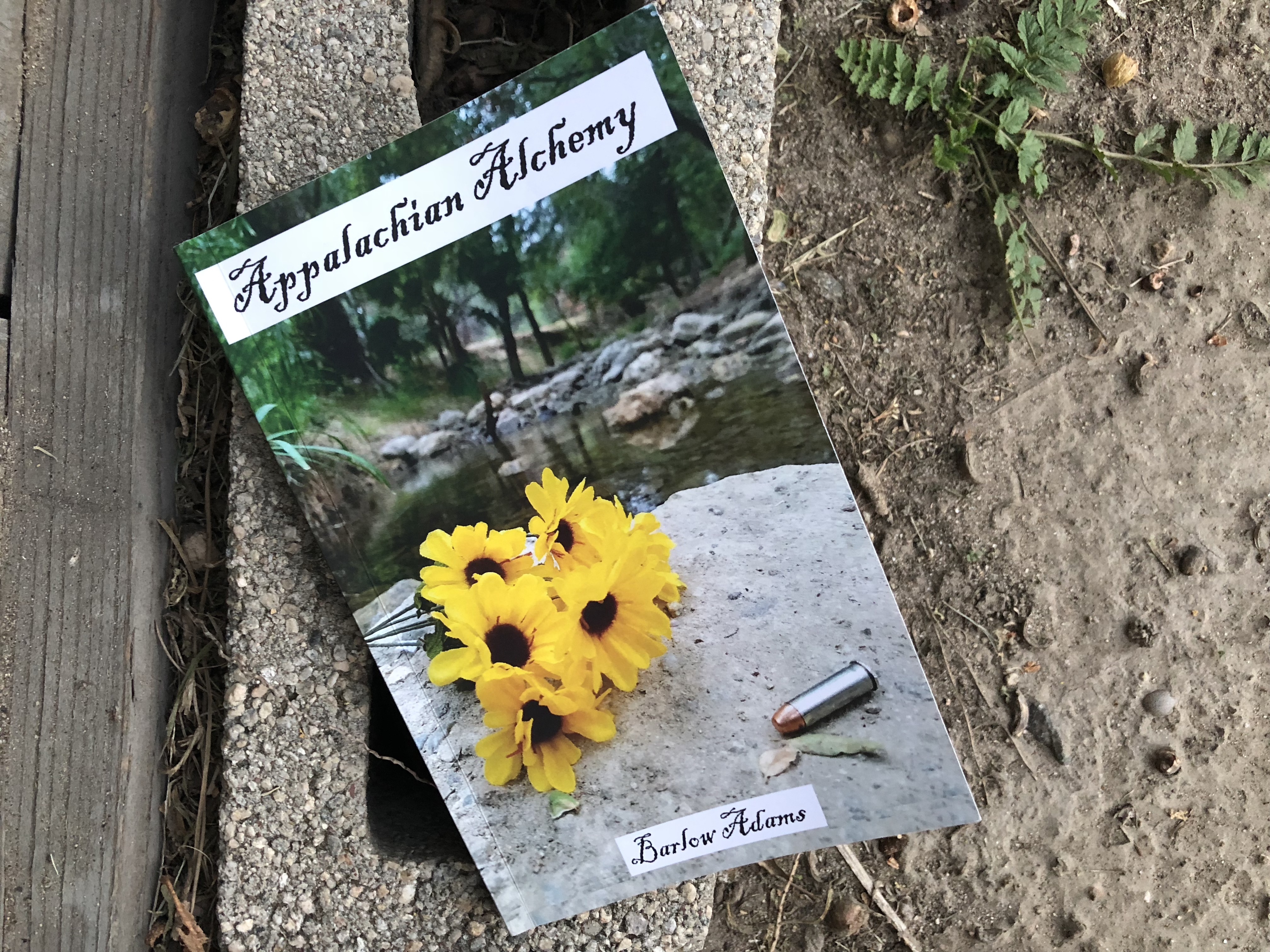 This first appeared in Pine Mountain Sand & Gravel in October 2018.

Are you made of lead or water? Will you sink, or will you flow?

Life is rough on the banks of the Kentucky River in Barlow Adams’s debut novella, Appalachian Alchemy, which finds the youngest Merrick boy trying to answer those questions in the aftermath of his father’s murder. When nine-year-old Book and his 12-year-old brother, Evan, watch Silas Long gun down their father, they learn firsthand that their family is part of a tribe of river people who operate under a particular code of honor distinct from the local sheriff’s brand of law. With Ennis Merrick lying on the ground “like he had fallen down drunk,” the two boys watch as Long unloads bullets from their deceased father’s gun and places the empty gun in his rope belt. Long hands the unused bullets to the boys, saying, "If’n you get on in age a bit and feel like I wronged you or your daddy...you give me [back] this bullet anyway you think is right." Grief, for these boys, comes with a responsibility for revenge.

For troubled, angry Evan, the choice is clear. He will avenge his father's death without the lawman’s help. But things are different for quiet, thoughtful Book. Will Book sink to the “ways of the county,” or will he be strong like the river and keep moving? Is he made of lead or water? Readers will appreciate his torn loyalties as the sheriff questions Book about his father’s killer. Book doesn’t so much take his family’s side as he is compelled to: “I opened my mouth to tell him. My father reached his hand out from the grave and clamped my lips shut.” This push and pull between loyalty to an insular community and the embrace of the larger world’s values of law and order form the novella’s central conflict.

Nine years pass quickly with Adams’s taut writing, and it seems Book’s elemental makeup is more water than lead. Smart, observant, and well read, the youngest Merrick is on track to transcend his raising and get out of Beattyville. In a Romeo-and-Juliet-scented plot twist, he falls in love with Silas Long’s niece, Kelsey, and seems willing to put their family feud to the side despite the displeasure of their relatives. Book may be different from his family and the townspeople, but he’s still drunk enough of the river water to have bought into the sense of honor that Beattyville’s residents prize above all.

Book’s mother and brother know he is special and expect him to leave them behind for a better life, but that doesn’t mean Book’s path will be smooth. While Evan quits school before the ninth grade, Book becomes the first in his family to earn his high school diploma and goes one step further, winning a partial college scholarship. He and Kelsey make plans for their future at random-seeming Syracuse University in New York. We never learn their reasons for that particular school over cheaper and closer alternatives in Kentucky or even big cities like Atlanta, Chicago, or New York City. In the end, it’s a missed opportunity to flesh out Kelsey’s motivations and desires beyond being with Book, but not a critical flaw. We understand their desire to leave Beattyville behind, and that is enough to keep the story moving.

But the ways of the river won’t be shaken easily. Book’s need to supplement his partial scholarship to realize his dreams drives him to sell the meth his brother has begun cooking to the area’s most desperate. These “tadpole” people who never leave the river are more than willing to trade their “cheap watches and Dale Earnhardt memorabilia pieces” for the promise of a high to transport them temporarily out of soul-sucking destitution. Book is conflicted by the morality of selling drugs, but practicality, ambition, and loyalty keep him in the game. And he can see the light at the end of the tunnel. Summer is ending, and fall means a fresh start at Syracuse University, Kelsey by his side. It all seems worth it—until everything changes.

At first glance, Adams’s novella seems to revisit a familiar and sympathetic story: A young man caught between old-school loyalty and the promise of something beyond poverty and crime in his rural hometown. The polarities that can be spun from this—nature versus nurture, family loyalty versus individual advancement—sound more simplistic than the complex portrait Adams has drawn of a morally flexible young man who finds his capacity for violence is greater than he thought when his allegiance is torn between love and family. A happy ending here is not a given.

Adams’s strengths as a writer lie within his ear for dialogue, his ability to capture the insularity of Beattyville, his strong, relatable characters, and his skill for meshing the tragic with the comic. Book’s father haunts Appalachian Alchemy, while his brother provides a perfect foil and cautionary tale to any river shortcuts that Book considers. Adams paints bonds of brotherhood as blood ties that give us life and purpose, but also hold us back. Graphic violence illustrates the depth of those ties and adds a dark intensity and grit to the narrative that may not please sensitive readers who would otherwise enjoy Adams’s poetic turns of phrase, such as a boy being one of a traveling salesman’s “leftover smiles” and hearing “a cricket’s chorus to her amen.” As you read, you’ll feel the water beat against the boat’s side and smell the diesel fuel burning. You’ll root for Book to be as strong as the river rather than as heavy as the lead bullets that brought his father and brother down.