Dachshunds always make me smile. If their wiggly walk, big personality and sausage shape don't draw enough attention, then most doxies will bark loudly to get it. The national dog of Germany, the dachshund (literally "badger dog") is the smallest dog bred for hunting. They are tenacious and brave, with long ears that usher smells into their astoundingly sensitive noses.

There's a great article in the February 2012 National Geographic ("Mix Match Morph: How to Build a Dog") about research into how dog breeds have developed over time, and how it could help unravel the complexity of human genetic disease. Of course the writer couldn't resist talking about the most recognizable dog breeds in the world -- the weiner dog. Here's an excerpt:

To create a dog well suited for cornering badgers, for instance, it is thought that German hunters in the 18th and 19th centuries brought together some combination of hounds -- the basset, a native of France, being the likely subject -- and terriers, producing a new variation on the theme of dog with stubby legs and a rounded body that enabled it to chase its prey into the mouth of a burrow; hence the dachshund...

...Pliable skin served as a defense mechanism, allowing the dog to endure sharp-toothed bites without significant damage. A long and sturdy tail helped hunters to retrieve it from an animal's lair, badger in its mouth. 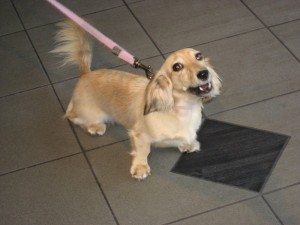 My little dachshund pup, Chloe, (above, mid-bark) is a miniature, English cream with long hair, with an assertiveness and playfulness big enough for a dog seven times her size. I'm not alone in my love of dachshunds...below I've assembled a little list of famous people who've owned dachshunds, and some links for more information about this fabulous breed.

The one about George S. is incorrect. The dog Daisy, belongs to his wife Aly Wentworth.