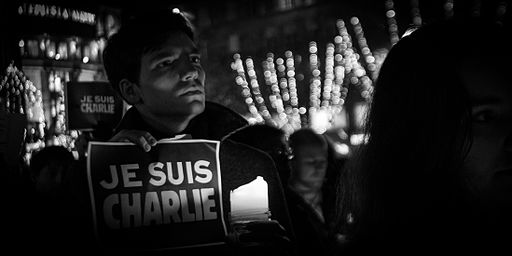 Robert had gone slack-jawed and moody from watching the news coverage of the shootings at a satirical magazine offices just a few kilometers from the apartment he shared with Cybille. The shaky footage shot by a passerby who heard cries of "Allah Akbar!” then the horrible rat-ta-tat-tat of automatic weapons had aired so many times that his outrage and disgust had numbed into weariness and fatigue. What could anyone do against those who reply to insults with bullets?

“No, you haven’t seen it,” she said. “Come with me and experience it in person. Don't just be an observer.”

Let's go children of the fatherland,
The day of glory has arrived!

Against us tyranny's
Bloody flag is raised!
In the countryside, do you hear
The roaring of these fierce soldiers?
They come right to our arms
To slit the throats of our sons, our friends!