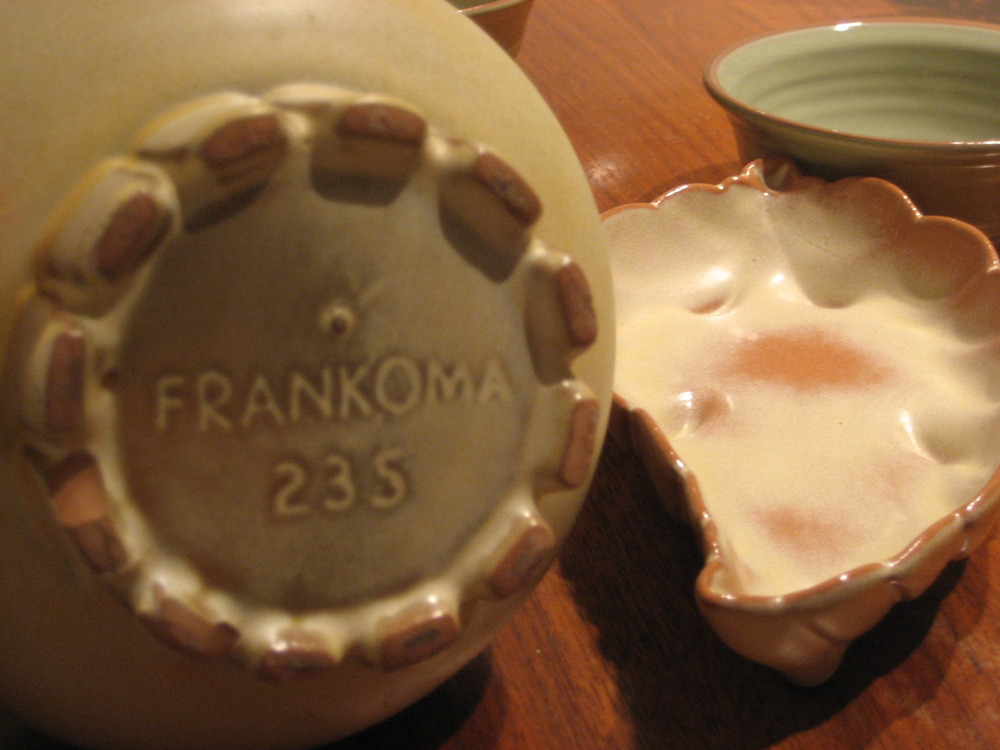 There's nothing particularly fancy about a piece of satin-finished Frankoma pottery, made of creamy beige clay from the Arbuckle Mountains or reddish clay from Sugar Loaf Hill. But something about its blend of Western inspired lines and practicality appeal to me, and I'm proud to have more than a few pieces around my home. And its humble beauty is now in demand by collectors, heavily traded on eBay and other auction websites, was featured on television as part of Martha Stewart's personal pottery collection and in a promotion with Paula Dean.

John Frank opened his pottery studio in 1933 in Norman, where he was a ceramics professor at the University of Oklahoma. Frank's inspiration came from the images of Native American and Western life and some of the most sought-after items included teapots, pitchers and dinner plates shaped like wagon wheels, slouchy cowboy boot vases and sculptures of deer and colts.

The muted, earthy glazes like Prairie Green and Desert Gold were chosen to reflect the beauty in nature and the world around us. Frank took a spiritual view of the pottery he made -- he is quoted as saying that "the clay carries a piece of each person who touches it" and legend has it he refused to hire anyone who did not love their job. An old Frankoma Pottery leaflet said its products were "inspired by its unique Oklahoma background, created by Oklahoma artists and produced in Oklahoma clay."

The pottery plant was moved and built in the hills of northwest Sapulpa in 1938, where it became a regular stop for tourists and travelers along the newly completed Route 66. Over the years, Frankoma Pottery created many custom and collectible objects, including ashtrays for the Broadmoor Hotel in Colorado, election day mugs for Democrats and Republicans, and items commemorating Oklahoma institutions such as the Cherokee Nation and Oral Roberts University. Frankoma Pottery has changed hands twice since the Frank family initially sold it to a Maryland investor in 1991. The current owner is Joe Ragosta, a longtime Frankoma collector and fan, who bought the company in 2008. The best way to acquire pieces today is probably through the collectibles market. As of this writing, Frankoma Pottery is not currently in full production, its website states that it is on hiatus, and the phone number has been disconnected.

Want to glimpse the breadth of Frankoma pottery created over the past 78 years? Check out this gorgeous Flickr gallery of Frankoma collections:  http://www.flickr.com/photos/eleamckee/galleries/72157622285836783/#photo_183...